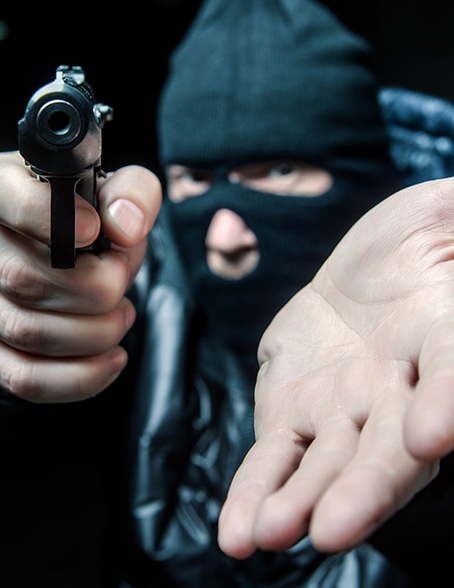 Robbery is one of the most common crimes in Canada, with more than 20,000 each year. It is a vast concept that includes harming a person on the street and taking their phone, robbing a store owner, or a bank.

A robbery accusation can be made on any occasion, force or the threat of harm, going along with stealing property, or trying to take possession from another person.

The Canadian Criminal Code states that a person perpetrates robbery in the following conditions:

Robbery is considered a violent crime, and usually, the Crown attorney will ask for denied bail. Besides, the prosecutor can also demand a custodial sentence.

As mentioned before, Robbery is considered one of the more severe offences you can be charged with by the Criminal Code of Canada.

It is charged as an indictable crime, and you have the benefit to a trial in the Superior Court of Justice, and you may handle your right to be judged by a jury.

If you are convicted of Robbery, you can be facing a sentence of up to life in prison.

Many factors will aggravate the harshness of a Robbery accusation, including the offender’s age, the value of the stolen property, and criminal record.

Other factors, such as the use of weapons or the degree of violence, can aggravate the accusation. When the offender caused any injuries to the victim, things can get worse in a criminal trial.

Consequences of a Robbery Conviction

Even though your primary concern is to avoid spending time in jail, a robbery case has many other negative repercussions, including:

If you or someone you know has been charged with Robbery, don’t waste time. Please call Richmond Hill Affordable Criminal Lawyer Plug today at 647-490-7660. We have represented endless matters of Robbery and have the skills and expertise to guarantee your legal counseling is the top-of-the-notch.

Robbery may be committed in several ways, but generally involves taking or the intended taking of another individual’s property without their permission while using or threatening to use violence, weapons, or both.

Extortion generally involves trying to obtain something through the unreasonable and unjustified use of threats or violence against another individual.

Robbery and Extortion charges are severe and should be addressed by a lawyer as soon as you become aware that you have been charged or are under investigation.

While the sentence for a robbery or extortion conviction will depend on each case’s circumstances, a conviction for any criminal offence will result in a criminal record.

A criminal record can negatively impact many areas of your life, including:

Besides, a conviction for these offences may carry other penalties, including a potentially lengthy term of imprisonment.

What does the Crown need to prove for a Conviction of Extortion?

For the Crown to prove their case, they need to show all elements of the offence beyond a reasonable doubt. The Crown needs to confirm that the accused person committed the guilty act.

It is the Crown job to show that the accused person made a threat or accusation, or used violence or menace. The Crown needs to show that conduct induced or attempted to persuade any person to do anything or cause anything to be done.

The Crown must also prove beyond a reasonable doubt that the accused person intended to obtain something as a result of his/her conduct and that he did so without reasonable excuse or justification.

What does an attempt to obtain “Anything” mean?

Section 346 of the Criminal Code criminalizes attempts by the accused to obtain “anything” by unreasonable threats.

The Supreme Court of Canada has said that the word “anything” must be interpreted broadly: it should be given a broad, unrestricted application.

What counts as a “Threat” under Section 346?

One of the acts that may ground an extortion charge is a “threat” made by the accused. The Crown should prove a threat was made.

The Criminal Code states, under Section 346(2), that the extortion provisions apply to all threats, except for a threat to institute civil proceedings.

Threats to institute civil proceedings are not threats for this section. They are the only kind of threats that are statutorily excluded from grounding an extortion charge.

The Supreme Court of Canada has said that a threat to this section does not need to be an otherwise unlawful threat.

For example, the Ontario Court of Appeal found an individual guilty of extortion for threatening to send a letter to someone’s employer, alleging they were involved in “highly questionable ethical and moral conduct.” While sending such a message would not be a criminal offence itself, the court found the accused guilty of extortion.

The type of threat needed for the offence of extortion depends on the circumstances. Every case will turn on its facts. However, threats of violence will never be justified. The only safe type of threat that can be made without extortion charges arising is a threat to institute civil proceedings.

What is Reasonable Justification or Excuse?

Section 346 of the Criminal Code states that for an act to constitute extortion, it must be done without reasonable justification.

Therefore, if the accused person can show he or she acted with reasonable justification or excuse, there will be no conviction.

The Supreme Court of Canada has said that even if the accused thought he was entitled to the thing demanded, that is not a reasonable justification or excuse to make a threat that would otherwise be unlawful.

The phrase “reasonable justification or excuse” requires a fact-specific inquiry to determine if it has been made in a particular case.

What are some Penalties for a Conviction of Extortion?

Penalties for a conviction of extortion depend on the circumstances of the offence, the characteristics of the offender, and the presence of any aggravating or mitigating factors.

Section 346(1.1) of the Criminal Code states that extortion is an indictable offence, and a conviction of extortion can result in a penalty for life imprisonment.

What if a Firearm is used during the Commission of Extortion?

If a firearm is used during the commission of extortion, there are mandatory minimum sentences of imprisonment and the maximum penalty for life imprisonment.

If a firearm is used during the commission of the offence and the offence is committed for the benefit or in association with a criminal organization, there is a minimum punishment of imprisonment for a term of five years in the first case; and seven years for any subsequent offences.

If any other case where a firearm is used in the commission of the offence, there is a minimum punishment for a term of four years.

What are some Defences to Extortion?

The availability of criminal defences will vary depending on the circumstances of the offence and the characteristics of the offender.

One defence provided by Section 346 of the Criminal Code is that the accused could try to argue the act was done with reasonable justification or excuse.

Even if the elements of the guilty act are made out, and the accused is found to have committed a bill that could be extortion, he or she could avoid criminal liability if it is found the offence was done with reasonable justification or excuse.

However, the circumstances of each case are different, and it is important to canvas the relevant facts with a lawyer to determine what defence(s) could be available to you.

Request your free consultation at 647-490-7660 to evaluate your case and fight for your rights.

More Services
error: Content is protected !!
Open chat
1
Powered by
Are looking for a criminal lawyer who can help you with a extortion or robbery type matter?
Free Consultation